The Map project comes as a result of the joint ideas and efforts of young people from South and North Mitrovica (part of the program Creating “a Third Side”) who decided to shine a different light and give another image to the city they live in. It shows what Mitrovica has to offer to any curious enthusiast and will serve to both locals and visitors. Next to natural be 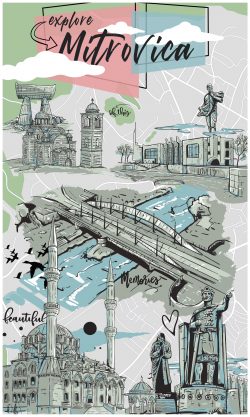 auties, historical monuments and key – locations, the map contains lots of information one might need to know Mitrovica as a whole.

Disclaimer: The information shown in the map is compiled from numerous sources and represents an approximate projection of Mitrovica. While every effort has been made to ensure that the map/drawings are approximately accurate, the ADRC, the Creating “a Third Side” program and our donors do not assume responsibility for the misuse or misinterpretation of any information from the map.  Each user of this material is responsible for determining its suitability for his or her intended use or purpose.

Creating ”a Third Side” – is a program implemented by #ADRC, that:

– developed the knowledge, skills, and experience of sixteen (16) young people (aged between 16-28) from North and South Mitrovica to act as intra/inter-community mediators and advocates of change, and

– initiated contact and facilitated dialogue between youth from South and North Mitrovica.