As part of the project ‘’Promoting Access to Justice through Mediation in the Northernmost Municipalities of Kosovo’’, the Alternative Dispute Resolution Center (ADRC – MCM) implemented an internship program in the Basic Prosecution of Mitrovica. For a five–month period the Center engaged two law graduates from both Kosovo Albanian and Kosovo Serb communities in the Basic Prosecution of Mitrovica.

On 7th of December, the ADRC’s Programme Manager, Zana Syla and the Chief Prosecutor of the Basic Prosecution of Mitrovica, Shyqyri Syla delivered the certificates of completion to the two interns, as their practical experience draws to a close. 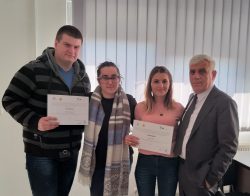 These internships were an opportunity for the law graduates to gather concrete experience of legal work within Kosovo’s legal sphere and judicial institutions. The aim was to enable the two participants to get a step closer to taking the Bar Examination, examination that requires at least a year of work experience, to apply the knowledge acquired in law school into reality, to get acquainted with practical legal procedures, understand the implications of the practical legal work & imbibe new skills in their skill set.

The delivery of the certificates allowed reflection on the benefits of this internship component for the interns and the involved institutions and the potential that it holds for improving law graduates’ professional prospects.

ADRC – Mediation Center Mitrovica appreciates the support and the cooperation of the Basic Prosecution of Mitrovica in the implementation of the internship program.

‘’Promoting Access to Justice through Mediation in the Northernmost Municipalities of Kosovo’’ aimed to promote the role of mediation and its potential contribution to the resolution of legal disputes within Leposaviq/Leposavić, Mitrovica/Mitrovica North, Zubin Potok, and Zveçan/Zvečan.

The project was implemented by ADRC – Mediation Center Mitrovica and was supported by The Deutsche Gesellschaft für Internationale Zusammenarbeit (GIZ) GmbH – Kosovo.